“Oh…come on!” Twonjex’s voice rings in my head while I am half-asleep, enough to jolt me up and see what was going on. Everybody else’s eyes are turned towards the front and instinctively, mine follow. Behold, approaching the narrow road path from the long blades of grass still covered in the morning dew is an elephant. Silence. The bus is minutes ahead, we’re running late for the game drive and to top it all, we have a large, seemingly moody elephant a few feet from the Toyota Nadia SU in which we’re seated with no guide (or weapons) – same elusive guide whose fault it is that we’re late.  Panic takes residence on our facial expressions – then as if on command, we grab our photo creators. Andrew, his Nikon D300 and Joanne & I, our phones,  – the shots accompanied by an occasional “wow” begin. 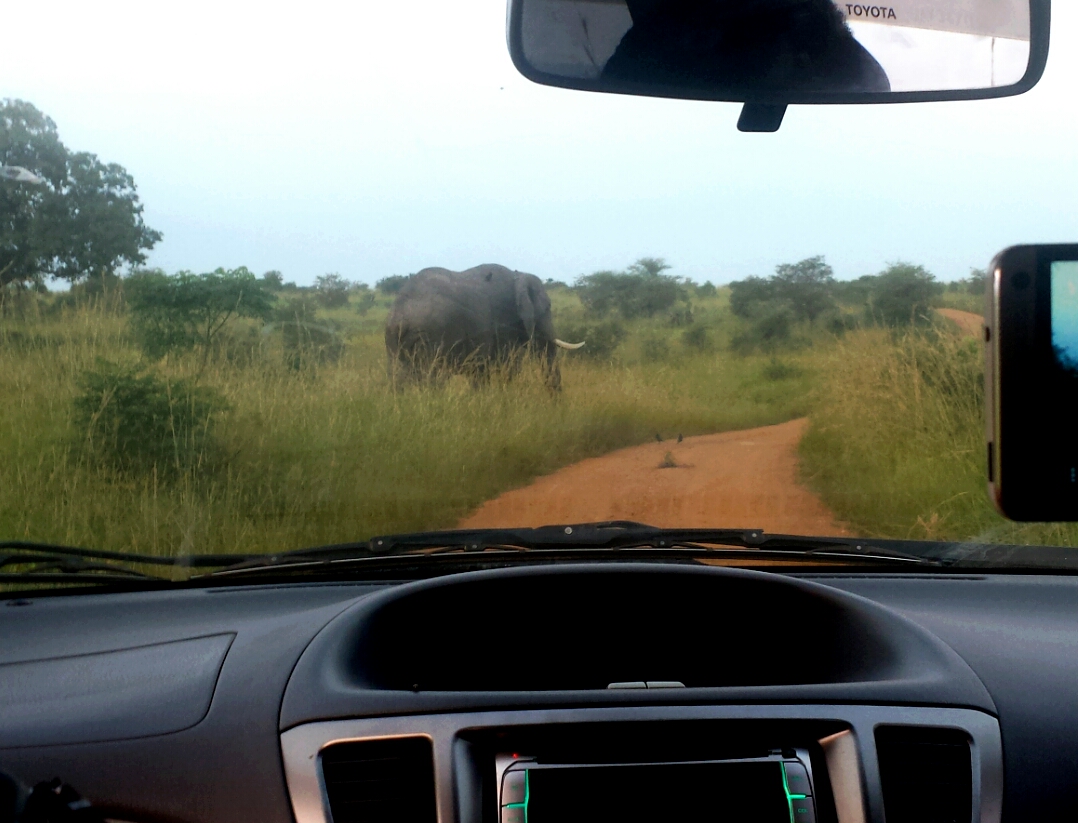 Elephant stomps into the path…pause…then walks ahead – in the middle of the road. Damn, now we’re going to really be late. Maybe we shouldn’t have driven back to pick that guide. Too late. Remember: you absolutely cannot hoot at an elephant. Not only is it illegal, you also just might have a Jumanji situation on your hands.
After a few minutes that seemed like an hour, lone elephant moves slowly, almost deliberately stalling, to the other side of the path. Twonjex steps on the gas. We’re back on the road and I think to myself; I must tell this story. 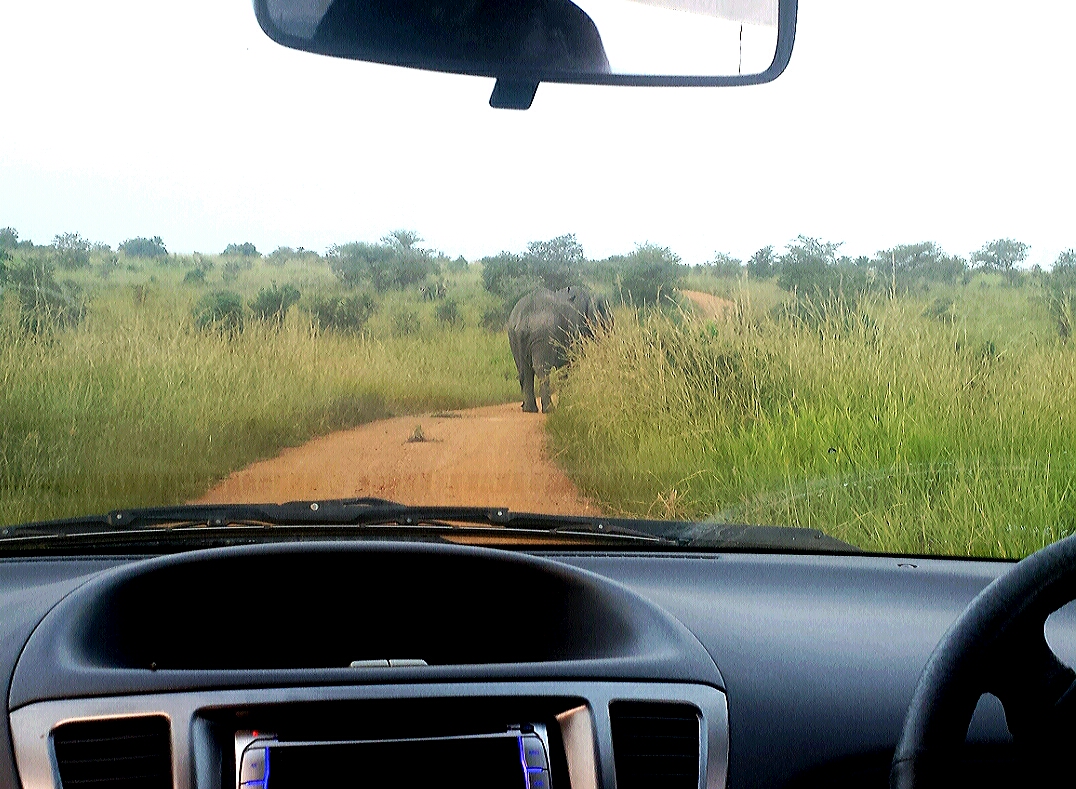 The game drive through Uganda’s largest National Park, Murchison Falls, is approximately 90 km of a one lane murram road between the large expanse of game habitat land on either side. It is quiet enough for you to hear a sudden movement in the shrubs over the car engine. The air so fresh, makes you want to pack an airtight bag full of it back to Kampala. Antelopes to our surprise seem to be largest population of animals here. You’d think with the cat family constantly pursuing them for a meal they’d have reduced in number – that’s not the case we discover as there’s quite a number of them here. 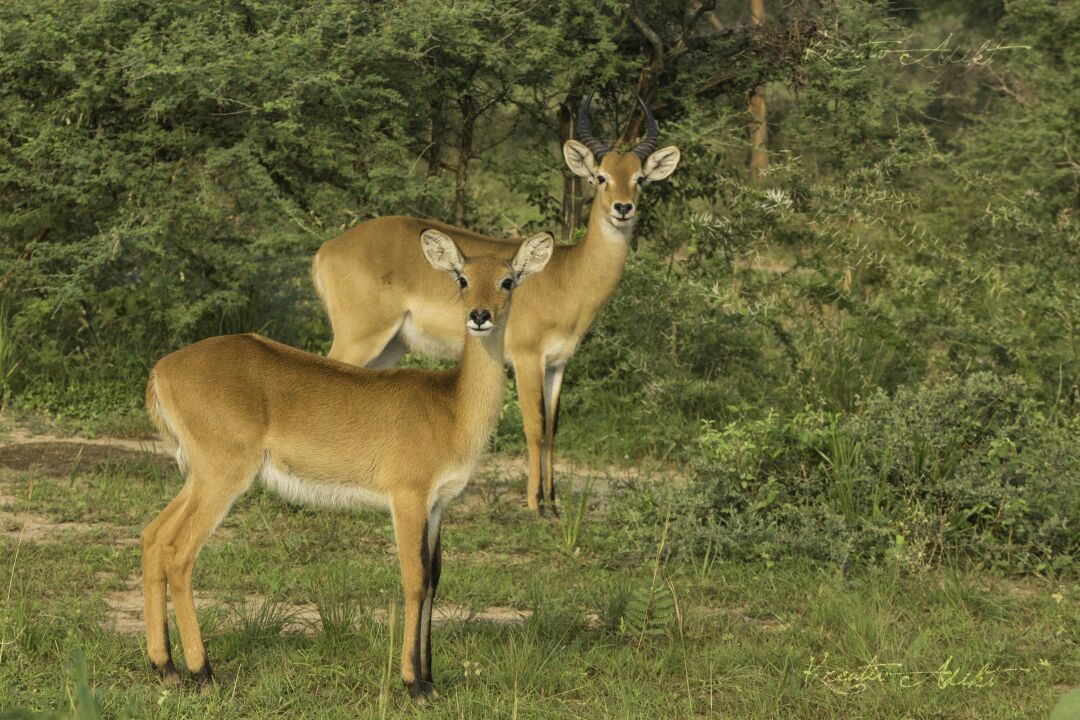 Also in sight are water bucks,  a few warthogs, baboons and an occasional sight of a monkey…but more significant than other animals as you go the further into the park, several giraffes wearing a cool orange and black ensemble. They strut around tall and proud with their long graceful necks making slow, deliberate front and back movement with every step. It’s a sight to see. Some, you’ll notice have their necks wrapped around the other’s. So what are are they doing? You might wonder. Well, wait for it…fighting. That’s right. Giraffes are so graceful that their expression of a physical fight is a ‘neck hug.’ If you had any doubts these animals are the royalty of the jungle, at this point they’re all erased. 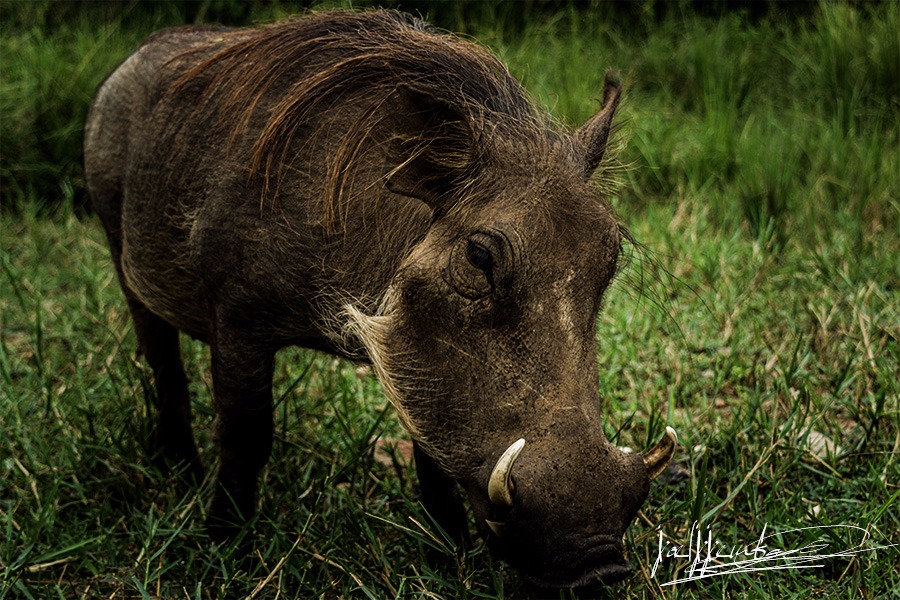 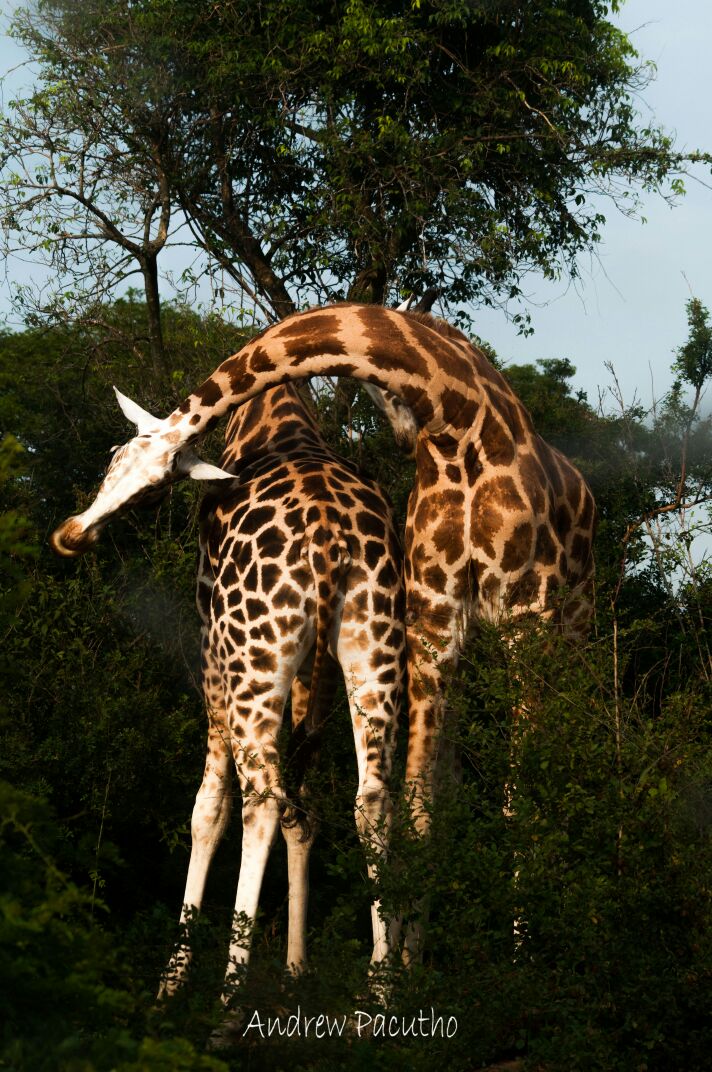 There was a unanimous anxiety to see a big cat; glimpse of a lion or leopard, anything from the Felidae family. Unfortunately this hope was in vain as even well aware there were some lying around in that tall savannah grass, we didn’t set our eyes on even one. Then as if to compensate this came the largest jungle mammal again; this time as a family unit. First, from a distance was a calf on the road path; rolling on the ground like a disgruntled naughty child. This we later learned is the elephants’ way of repelling insects that might bite them out in the wilderness – the sandy soil keeps insects away. From one side emerged other 2 little siblings accompanied by who were obviously the parents. While the infants all rolled like gigantic pumpkins on the ground, the elders like bodyguards stood protectively over them. 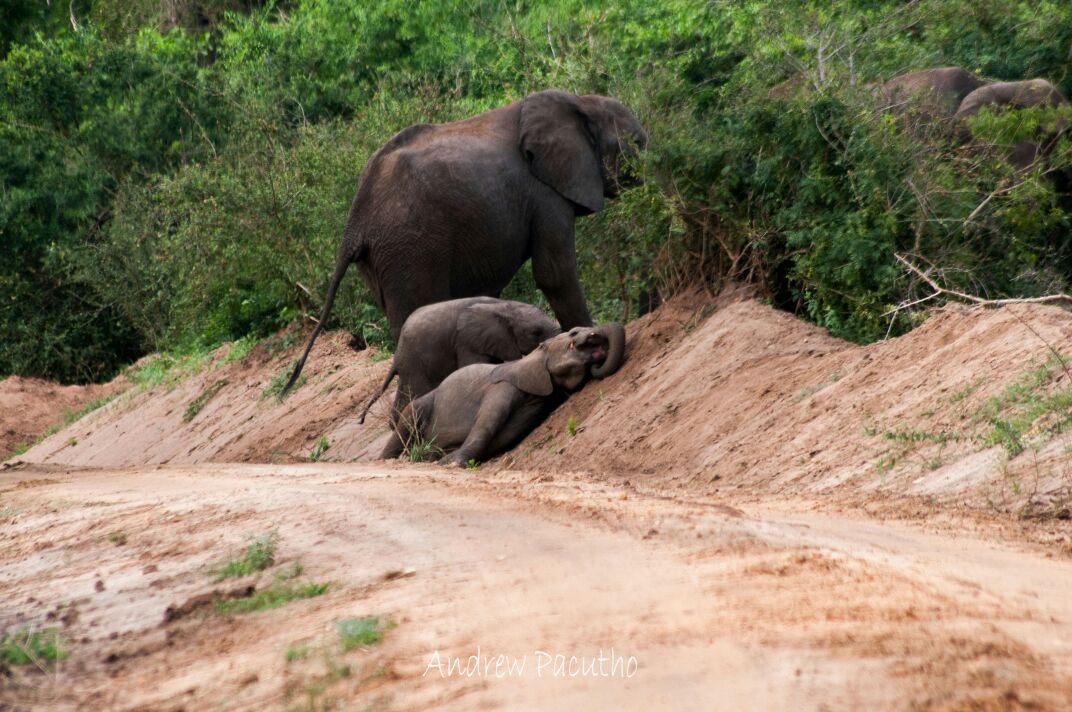 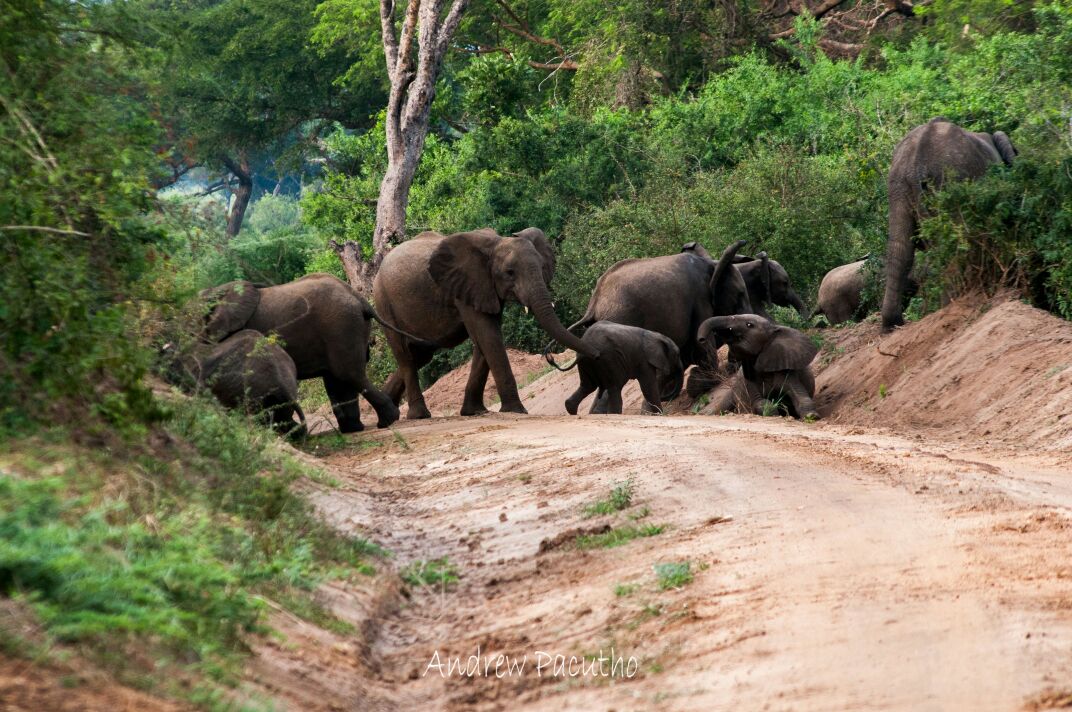 All this as we parked at a short distance and marveled at the scene. When they’d all crossed and given way for us to proceed to end of designated game drive course, I knew then that I’d lived; because not every human being in their lifetime gets to see a group of giraffes, some of them necks entangled or a spectacular display of a loving family of elephants on a casual afternoon stroll so up close. Later while I got onto the boat for the ride on the Pakwach side of River Nile, I smiled to the realization that I’d checked an item off my bucket list which I didn’t even know was listed.