My friends and I left one shindig for another the other weekend, party shenanigans determined to give our friend a befitting send off. In the car, a conversation came up: my kick-ass, ‘learning friend’ Tricia, was attending a gender class where the professor happened to bring up the masturbation topic and actually encourage the ladies, with a small tutorial even, to be free to do it. In Tricia’s words; “You should have seen people’s disgusted looks. You’d tell they were thinking, how can she say that? So out of curiosity I asked: who looked disgusted most; the girls or the boys? To which she replied: the boys. Which I found rather ironic considering many males during conversations on and off social media are always happy to announce the other uses of lotion that are not skin moisturization to which they’ve for long taken a liking. Yeah, you see where I’m going with this, right? Now, whereas if there was a self-pleasuring competition in which I was up against a boy I’d gladly let them win, you see how the guys in Tricia’s class despite many of them having taken to the habit, felt it “not fit” for the girls to partake in. Why? You tell me.

I will give you another instance that you might be even more familiar with. The infamous response to Winnie Byanyima’s tweet to which she replied with the phrase of the UOT twitter year, “Keep Quiet.” You see, as you might remember: late last year when a certain city socialite was physically abused by her boyfriend who she soon after the story broke took back by the way, (poor thing, I feel bad for her) many males, some on the Internet  others I personally knew then, were quick to dismiss her claims and the entire case citing the a-relationship-is-between-two-people-and-under-no-circumstance-should-a-third-party-attempt-to-get-involved argument and enjoyed rubbishing everyone who had as much as condemned the injustice which had befallen this woman. Fast forward, barely 2 months later, a social media nobody mastered all the “balls” he could from the unimportant fact that he wore trousers to tell the Director of Oxfam, an International community-based organization seeking solutions for poverty and Injustices in over 94 countries worldwide, what her role is as a partner. Luckily for them, no one dared to be against Winnie this time, at least not publicly (not that I’d like that any better) because well:

1. Feminists would “jump on it,” like UOT like to put it in an attempt to perhaps make us feel bad or ashamed for bringing some sense to vapid, irresponsibly permissive use of the internet. To which I say my friend, we shall not stand for nonsense. So you might as well when you post nonsense, sit tight and wait for us to “jump on it.”

2.You don’t come at Winnie with bullshit, that we’ve already established.
3. Winnie is a woman they perhaps are somewhat forced to respect her by virtue of her achievements. Still I wonder, did this man before he thought to quote that tweet perhaps know not to, as an obvious 3rd party, get involved in matters of two people in a relationship? 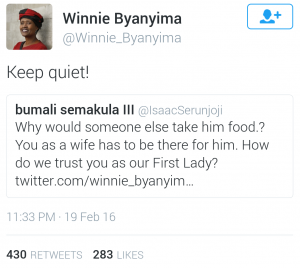 A couple of months ago during a conversation I regret ever having, a man said to me with a straight face, “You try so hard to be a boy.” Now let’s face it, if this claim holds even the tiniest drop of water (which it doesn’t) then I’m miserably failing because not to brag but neither my appearance, nor body form in anyway suggests attempts to belong to the male species. Back to the matter: this man made the claim based on judgment of what he referred to as “acting tough” and yet “deep inside you have feelings and emotions.” Give me a fucking break! (no, I’m not going to apologize for use of that language in this particular case) Whether you acknowledge it or not, masculinity has for decades and decades been built on worst case fragility. For anybody to insinuate that my alleged masking of emotions is an an attempt to be a boy, even when the comment was made in glorification of a man’s supposed superiority over a woman, it again ironically exposes the weaknesses in patriarchy. Because guess what, like the example in the first part of this blog post (The Male Chapter) and as Chimamanda expressly puts it in her, “We Should All Be Feminists,” ” We do a great disservice to boys in how we raise them. We stifle the humanity of boys. We define masculinity in a very narrow way. Masculinity is a hard, small cage, and we put boys inside this cage. We teach boys to be afraid of fear, of weakness, of vulnerability. We teach them to mask their true selves, because they have to be, in Nigerian(Ugandan)-speak—a hard man.”

In an adult world so unpredictable, you and I will agree that there are times you just want to at the end of a day, walk into a bar and have a hard drink by yourself in a bid to get your thoughts in order. In fact, many men would rather go to the bar and drown in alcohol that pick up the phone to speak to someone about their hard times. Which choice by the way is applauded with shallow a-man-must-deal-with-his-issues-alone arguments, “like a real man does,” they usually add. Shallow because I do not consider an argument to push any human being into possible alcoholism over the option of letting out their emotions, carefully thought out. Unfortunately many go for it. Men go to bars and have drinks on their own in peace: but the minute a woman walks into the bar alone to have a drink then she must be “lonely.” That some men would not think that maybe the woman too is dealing with their issues and would like to do it alone like they prefer to do, is a sad stereotype. Which is why like I’ve said before, I don’t want anyone to ever walk up to me with that insinuation or so help me God. I have many people to go to and want to be with when I’m lonely and strangers in a bar aren’t some of those. 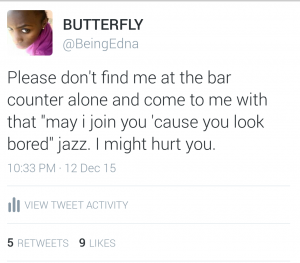 On promiscuity and number of partners each gender is “supposed” to have; we’ve heard all the slut-shaming of women for the number of partners they’ve had and yet applauding men for being “players” and “hitting it.” The longer the list of the number of girls he has hit, the more applause he gets. If he has a “side dish” then he’s a real man but when she has a side kick, she’s a whore. Do I encourage promiscuity, absolutely not. In fact I consider it a weakness of character. However, for a father and husband, future or present to be applauded for this weakness is  a recipe for disaster. Even more ridiculous is saying that it is okay for one but forbidden to the other. To this argument I always add especially to the men, be very careful what you encourage. Sooner or later you will have a daughter living in this hell that you helped create; and when they fall victim to the devils that you helped mold and then, you might not find much amusement in it.

It is 2016 people. Both men and women must unlearn these deep-rooted stereotypes. In fact,  don’t be caught making an argument as mindless as, “Things have always been that way and they can’t change.” You’re always finding fault with the regime and saying how tired you’re of hearing the 1986 story and that change will and must come; now do you think it’s any easier having to hear the “It has always been that way” story in response to wanting change in how women are treated? The answer my friend, is deep in your heart.