Greetings fashion forward brothers! Rompers for men or “romphims” *rolling eyes* have arrived so that you may partake. To be honest I am excited for the trend; one because any fashion trend is an art to behold (yes, men’s leg day is now a thing), two and perhaps more importantly; because day by day, one fashion trend at a time, we unmask patriarchy’s harmful socially constructed roles for the male gender. How you ask? First it was the skinny jeans. Before it was widely “okay,” several men sat down for drinks and contemptuously regarded their confident and fashion forward counterparts who had embraced the trend. They came up with all sorts of excuses; “my balls can’t fit in those things,” “they’re too tight,” etc. And of course came the homophobes. “If you’re a man who wears skinny jeans, you’re gay,” they went on and on.

Some driven by their conditioned hate for the sexuality and others deep down green with envy that some of their own were brave enough to free themselves from that conditioning; something they were too afraid to do. So for several months they wore their large, disgustingly ill-fitting bell bottoms while the confident men shined in form-fitted skinny jeans. Fast forward to today, many of them, yes many, I can name about 4 men (you might know some too) have become wary of that particular burden of toxic masculinity and freed themselves. They strut the streets, bars and work corridors on dress down Fridays rocking skinny jeans. Years before the skinny jeans, it was the dreadlocks and piercings which many hated so much and later embraced, but I digress. 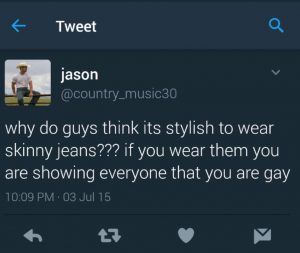 The romper: for years, the attached two piece blouse and shorts onesie was reserved for children and women to wear. In fact, a quick Google search of the romper history and you’ll learn that it first surfaced in the early 90s as a comfortable clothing for babies until the mid 90s when women began to wear it. By 2006, several designers were making and displaying them on the runways- for women. This week the internet is awash with the romper trend for men. A piece that has been renamed “romphim,” either by designers for supposed distinction, or by a few individuals whose dependence on the chains of masculinity as the alpha and omega of their very existence doesn’t permit them to be comfortable with the nomenclature considering the clothing has been widely worn by women. 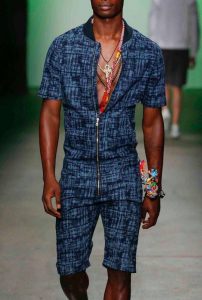 One of the many versions of the romper for men 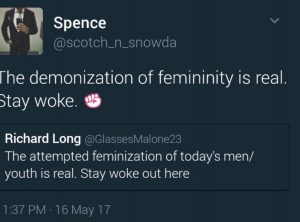 This cultural sensation has some men embracing it; while some have described it in contempt as the “feminization” of young men, a statement which says a ton about how society views femininity as a whole. Many others are just having a field day with internet jokes and memes for the sake of it. Now make no mistake, the romphim shall be worn, in khaki, cotton, silk, even Ankara. Still, jokes shall be made, drunk-in-masculinity men will deny themselves a fashion moment and like the case with skinny jeans, homophobes will attempt to shame men who wear it- many of whom even regularly wear overalls and/or often enjoy watching a game of rugby where highly masculine men wear shorts the size of my crochet bikini bottom. As to whether many will finally free themselves of fragile masculinity and explore the fashion trend, time will tell. For now, change is happening, and it is influenced by our fashion in a the place where we all love to be- the internet.

For The Man Who Swears They Have No Privilege