In the obscurity of a little, still unknown-to-me village in Mukono district, Uganda about 7.5 km off the infamous Mukono-Katosi road, Lakeside Adventure Park is your ultimate literal definition of the “away” in “getaway.”  The road to- is characteristic of stone gavel, turns and corners arousing anxiety of driving to an unknown destination; but the murram road will eventually lead you home. The atmosphere on arrival is typical of a lakeside setting; the lush green plants and trees. The small white stones decorated on either side of the walkways in single file, the exhilarating sound of waves lightly splashing onto the shore – and as you walk further into the premises, the sight of a water body; the glorious Nalubaale which John Speke named after Queen Victoria. Just before you get to the lake though is where the real magic lies. It’s the high walls covered with footholds that look nothing bigger than the palm of the hand. One wonders how these are supposed to hold an adult’s foot as they advance higher and higher all the way to the top. It’s the string of short planks of wood 4 meters off the ground that seem to go on and on, held together by small ropes. These onto which one is to walk as they cling onto safety by two other rope lines with only a not-so-constant reminder of a life insurance from the anchor hooks fastened to their waists. It’s the thick ropes fastened into a spiderweb and leading to a zip line which on whose sight you decide there and then that you must do this course and do it to the end too because only then would you be able to zip line: another crucial point to note, you can not turn back. It is then, with the adventure genes in me energized and the adrenaline rising, that I knew that to leave this park without taking on one rope climbing course challenge would be not only an act of cowardice, but a betrayal to all adventurers too. The guide’s words sounded precautionary and at the same time re-assuring. “You have to ensure for your safety that the hooks are hung on the rope on opposite sides for your safety…” Then as you climb up, “Many people have done this, it takes just minutes.” At the beginning it was pretty smooth; so much so that I thought to myself, for someone that has conquered the great Tororo Rocks, this is a joke. So I went through the first hurdle and the second one, jumped into the green camouflage hunting-like tent through which I walked with a swagger that only a certain good Dr. knows too well, proceeded onto the big log and there after the pulley onto which you’re to sit and in tug-of-war style only this time while moving forward, help yourself to the other side. 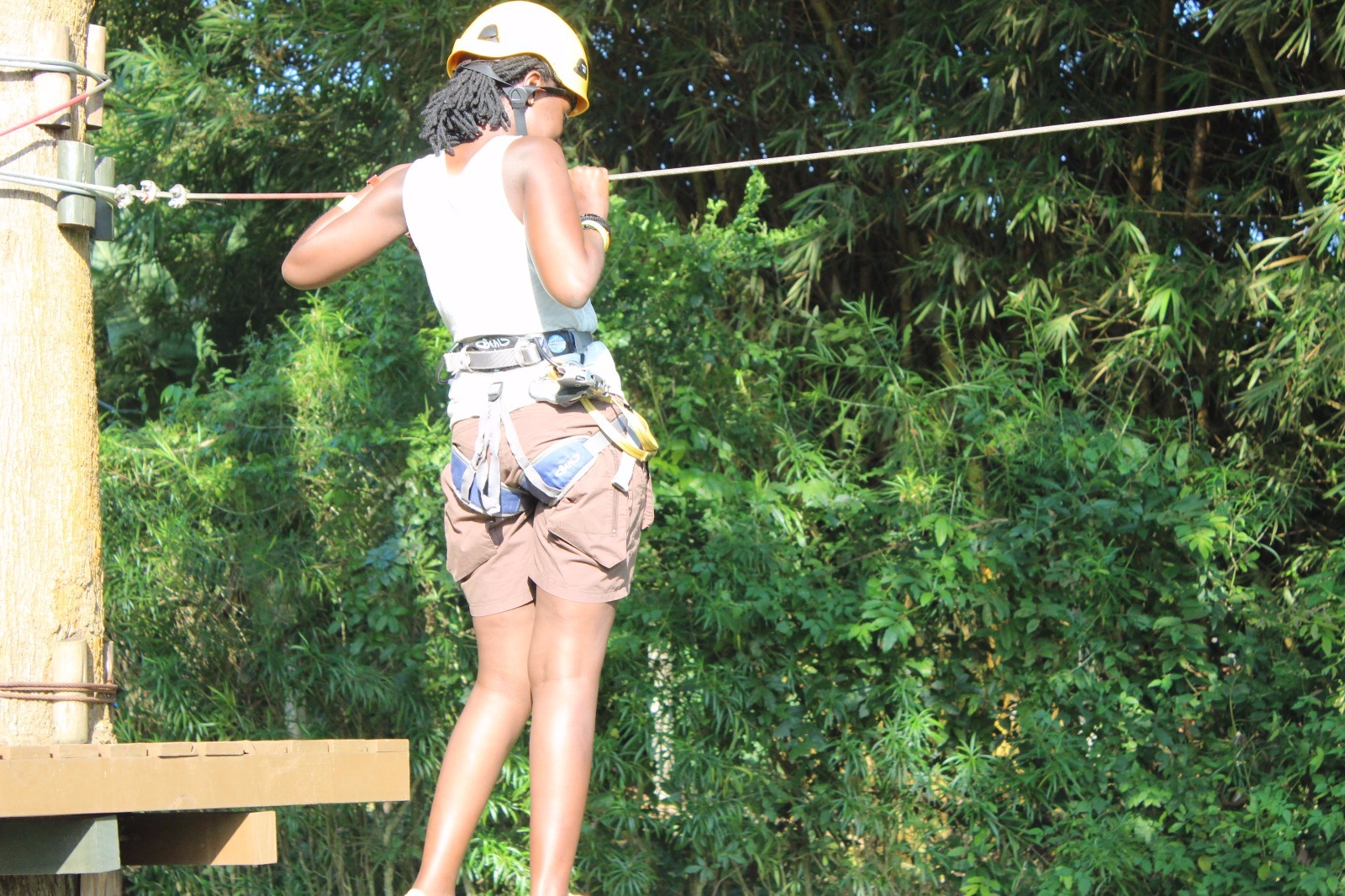 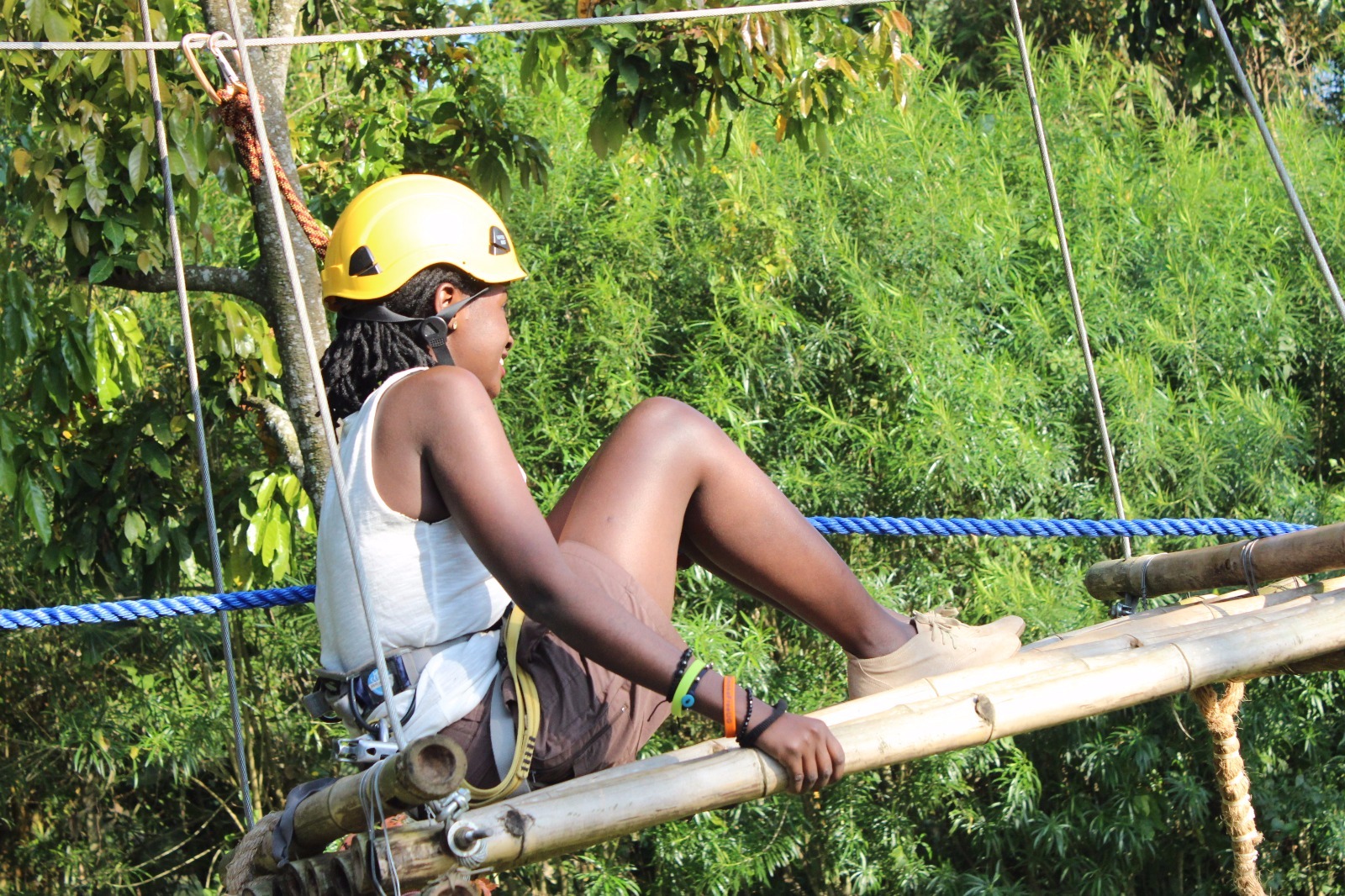 Then all hell broke loose. As soon as I stepped on the first log of the 4 nailed together in a T-bar each, it swung from one end to another slowly at first, then faster at a pendulum bob pace. It was almost like one of those Ninja Warrior episodes when you watch a participant in their last desperate attempts to keep on course before an inevitable fall. The muscles in my big legs were strained to the level of giving way: my arms felt like I was carrying a 20 kgs dumbbells in each hand and I could feel blisters coming on. The panic was unmistakable. Between, in all of this, the guide shouting, “keep walking” from meters below and my other 2 major spectators looking at me hopefully, the pressure was on. There was no way I was going to give up and hang in the air by an anchor around my waist and two hooks like a failure. The ninjaness in me agreed. So I took the gamble with my already seemingly failing legs and moved to the next three without as much as a breathing break. Before I knew it, I was standing at the next pit stop. With hand blisters and shaking legs but with one thought in mind; that I’d conquered. 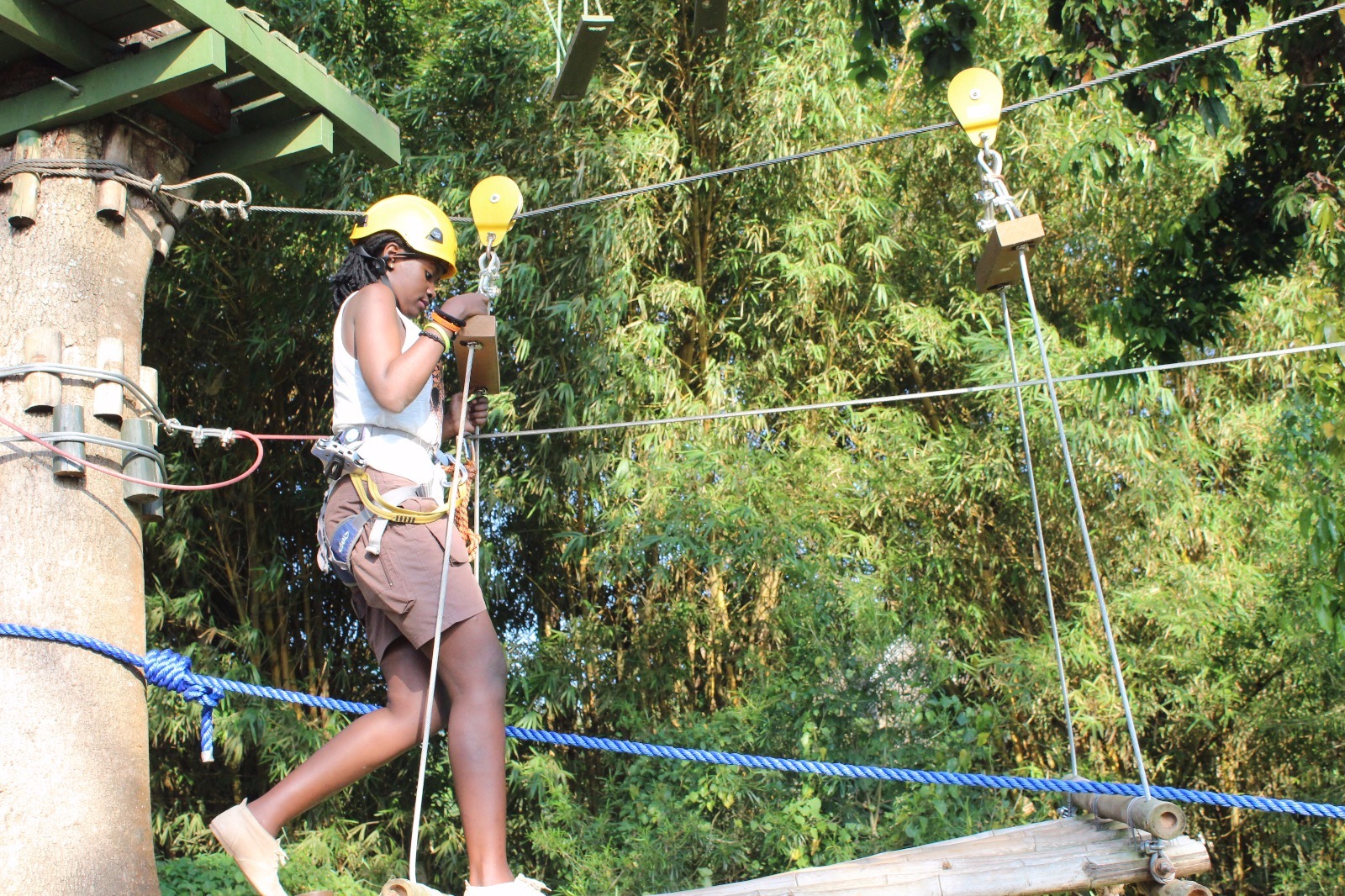 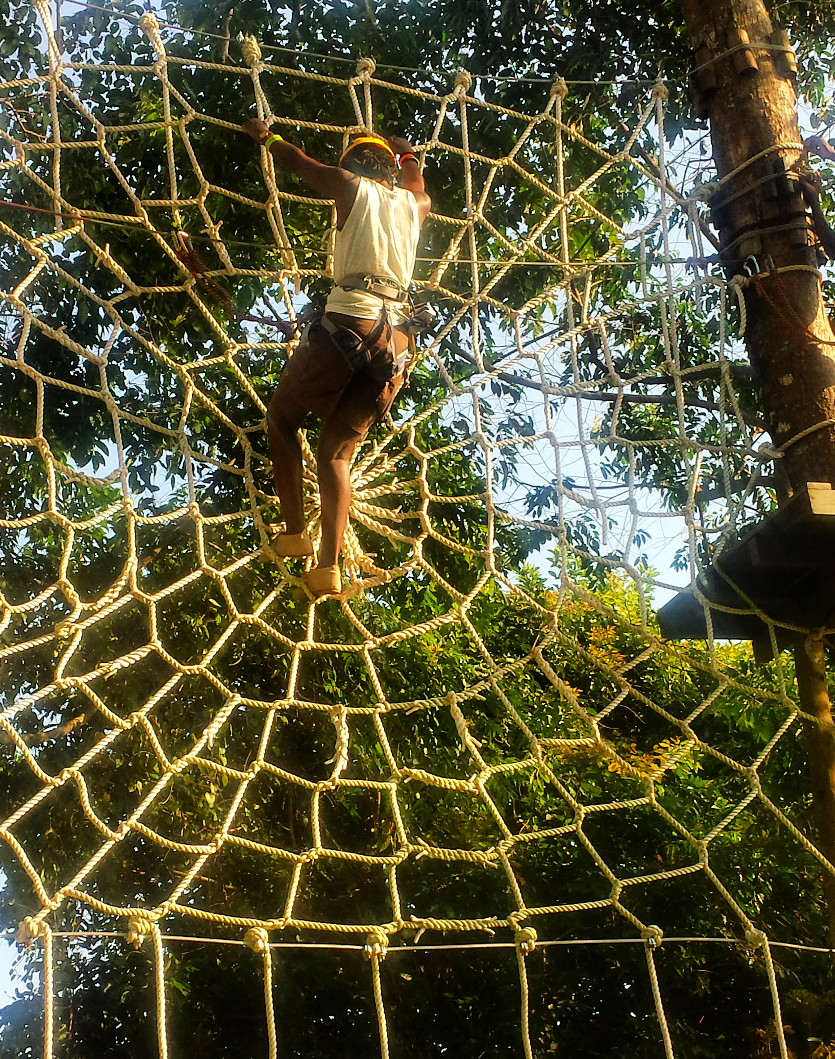 The next challenges, a line of wooden crisscrossed bars and other planks were pretty much a walk in the park. The spiderweb ropes led me to the zip line and voila! I had done it! Another adventure book closed. My adrenaline fed and my confidence to tackle other challenges elevated. Between me and you, from a rope climbing course you’ll also learn or boost a few soft skills. For example, I for a fact can tell you that my listening skills, patience and determination were all put to the test. The result of these tests I’ve just retold. Can you hold your own when your soft skills are put to the test? There’s only one way to find out.